skip to main | skip to sidebar

52 ways of looking at Poem by Ruth Padel

In autumn, I start a creative writing course with the Open University. One of the assignments is to write an 80-line poem. I know you out there who dash off a daily Sonnet or Etheree ( yes I had never heard of it before either-this is what one is and this is one I prepared earlier ) wonder what all the fuss is about.

Well the fuss is that the last poetry I studied was back in 1977-8 when I started but didn’t complete English A’ Level ( I decided that living on a commune where naked women –some hippie idea of moon cycles- gardened was the better option... and dear reader it was!) And frankly apart from the last few weeks, I have not written poetry since the 60’s which was for some Cadburys Chocolate writing competition which I won but then so did the entire class. Clever marketing rather then good writing one suspects.

This is my fourth poem ever written-yes I know but it takes time to learn. Thanks to 52 Ways of Looking at a Poem by Ruth Padel, I now know that this 50-word poem is a free form (1) syllabic (2) verse with rhythm maintained by the use of enjambment (3) and an underlying 7-5-7 syllabic beat within an irregular 4 stanza form(4). And that it leans to metaphorical expression through the voice of an old woman. See what happens when you read Poetry books. 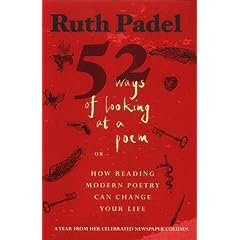 British readers may recognise Ruth Padel from her long since axed on Sunday poetry section where she published a modern poet’s poem and then explored a way of reading or understanding it. This book pulls together 52 of those articles and introduces the reader to the who and what of modern English Poetry. I hadn't heard of one of the poets(no sniggering in the back please) so the book enabled me to read and catch a flavour of poetry today that… lifts the veil from the hidden beauty of the world, and makes familiar objects be as if they were not familiar.

To illustrate what you are missing (and how so much more I have to learn) are two modern sonnets that caught my ear. Read them and then say modern poetry is so elitist and obscure.

Some days, although we cannot pray, a prayer

utters itself. So a woman will lift

her head from the sieve of her hands and stare

at the minims sung by a tree, a sudden gift.

Some nights, although we are faithless, the truth

then a man will stand stock-still, hearing his youth

in the distant Latin chanting of a train.

console the lodger looking out across

a town. Then dusk, and someone calls

a child’s name as though they named their loss.

Darkness outside. Inside, the radio’s prayer-

How often have I carried our family word

for the hot water bottle

to a strange bed,

as my father would juggle a red-hot half-brick

in an old sock

to his childhood settle.

I have taken into so many lovely heads

An hotel room in

with a girl who spoke hardly any English

my hand on her breast

or some other shy beast

that has yet to enter the language.

(2) meaning you count the syllables rather then the stresses

(3) meaning the line or phrase carries over on the next

What others are saying

Hi, welcome I appreciate the time and effort you are making to leave this comment and I will respond when I can